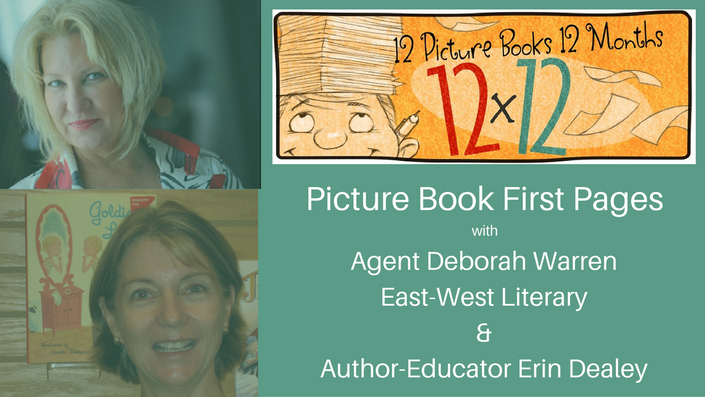 Have you ever wanted to hide inside an agent's brain while she was reading picture book submissions? Would you love to know:

In this webinar, you will get an inside perspective on how agents read manuscripts to evaluate whether or not they want to offer representation. You will learn:

This course is a video presentation only, due to the anonymity of the authors' submissions.

Deborah Warren founded E/W in 2000, after 17 years at Harcourt, and has a strong background in sales and marketing. She’s a strategist, incorporating long-term goals to help E/W clients not only grow a career, but to flourish within that career. With over 35 years’ of experience in the publishing industry, and over 16 years at the helm of the Agency, Deborah not only represents authors and illustrators of picture books including Jim Averbeck (One Word for Sophia), Anna Dewdney (of the Llama Llama franchise), Kimberly and James Dean (of the Pete the Cat franchise), Gianna Marino (Night Animals) and Antoinette Portis (Best Frints in the Whole Universe), she represents authors and illustrators—both debut and established--in the board book, concept, novelty, multicultural, non-fiction, middle-grade and young adult markets.

Deborah’s looking to fall in love with character-driven stories with heart, enhanced by a hook, told in a unique, fresh or distinctive way. Her sweet spots: short, quirky picture books and smartly layered, memorable and insightful MG and YA fiction. And she LOVES finding debut talent – in fact, it’s a bit of a specialty for the Agency.

As an example, we're thrilled to have helped launch and nourish (among others) the careers of authors Kwame Alexander, whose debut MG, The Crossover (HMM) was awarded the 2015 Newbery Medal and the 2015 Coretta Scott King Honor; Dave Butler, whose debut MG, The Kidnap Plot, the first in a trilogy, has recently been released by Knopf/RH; NYT-bestselling Alethea Kontis, and her debut YA Fantasy novels launched by the YALSA nominated and Gelette Burgess Award winner Enchanted; and author/illustrator Sarah Aspinall, whose debut picture book, Penguins Love Colors, is slated for publication from Blue Sky Press/Scholastic, along with the companion volume, Penguins Love Their ABC’s.

Erin Dealey is a children's author of many genres, from board books to YA, including DECK THE WALLS~a kids’-eye view of the holidays, GOLDIE LOCKS HAS CHICKEN POX, and LITTLE BO PEEP CAN’T GET TO SLEEP. Among Dealey's forthcoming 2017-18 titles are BABIES COME FROM AIRPORTS (adoption/Gotcha Day), A KINDERGARTEN ALPHABET, and PETER EASTER FROG.

Her energetic school visits featuring her books and her YouTube Writer’s Rap have elevated her to “rock-star status” at elementary and middle schools everywhere--30+ events per year since 2002. (After one such visit, two 5th grade boys darted into the library, told Dealey, “You’re funnier than Will Smith!” and dashed away.)

OH; and talk about drama! Erin Dealey has been K-12 Theater and English teacher “for decades,” and heads the Theater Department of Sugarloaf Fine Arts Camp each summer.

Erin is represented by Deborah Warren of East-West Literary Agency, and serves as a second reader of submissions for the agency.

First Section
Available in days
days after you enroll