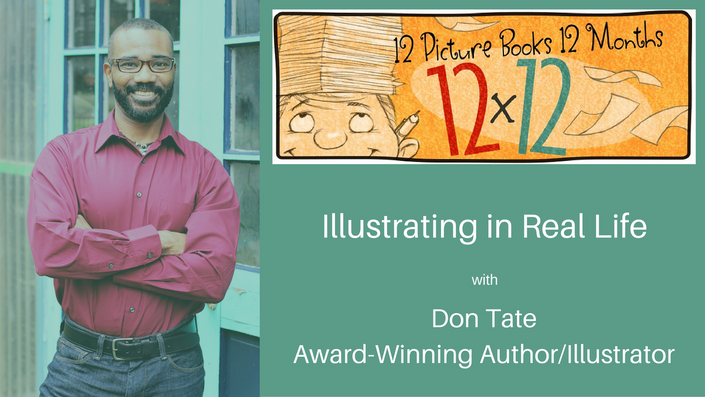 Award-winning author/illustrator Don Tate provides an inside view of the life of an author/illustrator. Don shares how he got his start, courses that helped him improve his craft and catapult his career, and his best advice for authors and illustrators today.

In this webinar, you will learn:

Don Tate is an award-winning author and the illustrator of numerous critically acclaimed books for children.

Poet: The Remarkable Story of George Moses Horton, written and illustrated by Don Tate, published in September of 2015. It received starred reviews from Kirkus, School Library Journal, and Publishers Weekly, as well as being selected as a Kirkus Best Children’s Books List Selection, 2015, and an ALA Notable Children’s Book, 2016.

It Jes’ Happened: When Bill Traylor Started to Draw, illustrated by R. Gregory Christie, (Lee & Low Books, 2012)(ages 4-up) marks his debut as an author. It Jes’ Happened is a Lee & Low New Voices Honor winner, and an Ezra Jack Keats New Writer Honor winner, 2012. It received starred reviews from Kirkus, Booklist, and School Library Journal, as well as being selected as a Kirkus Best Children’s Books List Selection, a Booklist Editors’ Choice, 2012, and a New York Public Library Top 100 Titles for Reading and Sharing, and more! Also honored as a Bank Street College of Education Best Children’s Books of the Year, 2012.

She Loved Baseball: The Effa Manley Story (HarperCollins, 2010), written by Audrey Vernick, is a Junior Library Guild selection. School Library Journal said, Both author and illustrator are on top of their games as they bring this inspiring story to life.” She Loved Baseball was honored by the Bank Street College of Education as a Best Children’s Books of the Year.

Don is also the illustrator of Say Hey: A Song of Willie Mays (Jump at the Sun, 2000). This book, the first trade picture book of his career was praised by Publisher’s Weekly, who said, “…Tate’s sharp-edged pictures boast vivid, sparkling colors and a vibrant immediacy, ideal for the subject.” It was also named a Child Magazine suggested title.

His other trade picture books include, Black All Around! (Lee & Low Books); The Hidden Feast (August House, 2006); The Legend of the Valentine(Zondervan, 2002), which is a Christian Bookseller’s Association best seller.

Don has been a featured illustrator/speaker/exhibitor at various literary festivals, including the Texas Book Festival; San Antonio Book Festival; The Savannah Children’s Book Festival, The Dallas Children’s Book and Literary Festival, Bookamania, and such conferences as the National Council of Teachers of English (NCTE); American Association of School Librarians (AASL); National Council for the Social Studies (NCSS); The International Reading Association; Texas Library Association Black Caucus Roundtable, The National Alliance of Black School Educators. He speaks at schools, college/universities, public libraries and writing conferences, including the Vermont College of Fine Arts; Texas Writer’s League; Society of Children’s Writers and Illustrators; Pathways to Literacy Conferences(International Institute of Literacy Learning). Hope’s Gift, a book that Don illustrated, was featured at the Pavillion of the States at the 2013 National Book Festival.

In addition to children’s books, Don also licenses his art to product manufacturers. KIDZ is a line of juvenile bed and bathroom products that includeswallpaper, light switches, wall art and drawer knobs. He also has a line of children’s textile/fabric available at specialty fabric shops, which feature his designs.My Peepz, a group of African American characters, is marketed to ‘tweeners and has been a hit in the calendar market.

Don earned an AAA degree from Des Moines Area Community College. He has worked as a graphics reporter at the Des Moines Register and Austin American-Statesman newspapers, and as a publication designer for the Perfection Learning Corporation, an educational publishing company. In addition, he was the art director at an advertising and market research firm, and a graphic artist at a print shop. He also flipped burgers in high school and swept floors at the mall.

A native of Des Moines, Iowa, Don currently resides in Austin, Texas with his wife and son. In his spare time, Don is a gym-rat, having competed (in better fit days) in natural, drug-free bodybuilding.

Don Tate Webinar
Available in days
days after you enroll